You and your dog may have been together for years now. You have been taking care of him since he was young and have trained him with some tricks of his own. And suddenly, you realized that there is one trick you want to teach him. And so you ask, “But my dog is 6 years old. Is it ever too late to start training a dog?“

When To Start Training A Dog

You should start training your dog, the moment you bring him home. It is important to start him early so that he would develop the habit. It will make things easier for him and you too!

Training a puppy or a dog takes a lot of time and effort. Your puppy might not obey your commands at first, but everything gets being used to.

The first stages of puppy training are more focused on building a relationship with your dog and introducing him to his home environment.

Then comes the part where you socialize him with his surroundings.

And comes the detailed training on socialization, potty training, and teaching your dog some tricks.

But the questions again are, “What if you have not trained your dog while he was young?”, “Will there ever come a time when you can no longer train him?” and “is it ever too late to start training a dog?”

I’m pretty sure you’ve heard of the saying, “You can’t teach an old dog new tricks.” But, this definitely is not true!

You may have failed to train your dog while he was young because you did not find the time to do it or you knew nothing about training a dog.

You may have gotten an untrained rescued or adopted dog. Or, your dog might also have developed some traits over time that you want to get rid of now.

Whatever the reason is for having a dog that still needs training, don’t stress yourself out. Training him even if he is older is still possible.

Be assured that it is never too late to start training your dog now.

How Old Is Too Old To Train A Dog

Most pet experts say that a dog is “old” when he reaches the age of 5-6 years old. For some breeds which generally tend to live longer than other breeds, they are considered mature at the age of 6-7 years old.

At that age onwards, your dog can still be taught some dog obedience lessons and new tricks.

But, when is it too late to train a dog?

It is never too late to start training an older dog, There are some things though that are best taught to your dog while he is young. But this does not mean that you can no longer teach him when he is past his young age. It’s just the process might take longer and be more tedious.

It is not that older dogs are not receptive to new commands. It’s just that, as with humans, some habits are hard to break.

Take for example a case of an older dog that has the habit of sleeping in your bed. Training him not to sleep in your bed anymore would take a long time.

First, he has to “unlearn” sleeping in your bed. Then, he has to learn to sleep on a new bed.

So, it’s twice the work and time to train him to sleep in another bed or his own bed.

Advantages Of Training An Older Dog

Most older dogs have, in one way or another, learned dog commands over time. They also know what some hand signal means. Having ideas of these make teaching them easier as you really do not have to start at zero.

They also have ideas on what the tone of the dog owner means. Through the years, they have identified what a particular tone wants to convey. Because of this, they pay attention better and are easier to train.

Older dogs are also easier to train because they are more appreciative of your presence. Through experience, they have learned that obeying your commands and abiding by the rules get them rewards.

Older dogs also have experiences throughout their lifetime that make them easier to train. They understand that not following would get them no rewards or that they will not be praised when they don’t obey.

Benefits Of Training An Older Dog

Training an older dog would definitely benefit you and your dog. This would strengthen the bond between and your dog and establish trust between you too.

It will improve your relationship with each other and make things easier for both you and your dog as you both establish habits with each other. It likewise would be healthier for you two as you actively do things together.

How To Train An Older Dog

The easiest way to train an older dog is through the use of reinforcement. Make your dog learn that he has to do some things to earn a reward. Positive reinforcement is always effective in dog training.

It is important though to always remember the limitations of your older dog. Set reasonable expectations on what your dog is capable of or not.

If your dog is no longer physically active, don’t expect him to do run and catch with you. Also, it is important to take into consideration your dog’s health condition.

Since we independently research and recommend the best dog products, naturally our content may contain links for products we love. If you click on them we may earn a small commission.
Sale 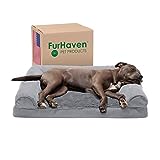 Furhaven Pet Bed for Dogs and Cats - Plush and... Find private or group dog training classes near you.